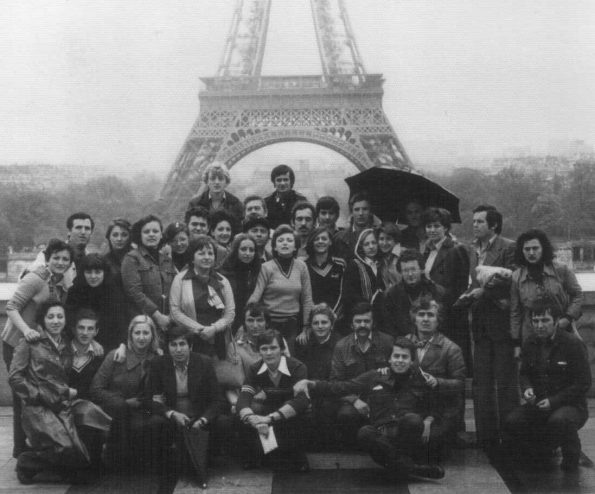 Cultural Artistic Society “Dimitrije Koturovic” was founded  on November 12 in 1967, as a continuation of previously established
cultural  societies on the territory of municipality Rakovica (“Radoje Dakic” and “21. maj”) and also as a fusion of cultural
and artistic groups and sections in labor organizations and schools.

The decisive role in the formation of the company had a group of enthusiasts, lovers of song, dance, acting and socializing, led by Milos Kicevic, who became  the first president of the  Artistic Society.Slobodan Prokic was appointed for the first artistic director. By bringing together an ensemble made of young people, full of enthusiasm, with developed hearing and sense of rhytm, some previous experience in dealing with folk dance and, along with it, forming a folk orchestra under the artistic leadership of Djordje Vasic, a member of the Belgrade Philharmonic, the society started operating. In terms of programming, Koturovic chooses eminent authors, such as: Branko Markovic and Danilo Srbljanovic that would soon be added to the repertoire of choreography of the present director Slobodan Prokic. In 1968 came the first performance of the Folklore Ensemble in the hall of the Cultural Center Rakovica, the same year the Ensemble goes on the first foreign tour, to Italy.

Along with establishment of the Ensemble of Folk Dances and Folk Orchestra, other sections were also founded, which achieved  significant results.  The KOT Theatre recorded numerous premieres and awards, and art section, which worked in the first decade since its inception, achieved remarkable results in art colonies and exhibitions. Choir had worked with great success until 1989, first as mixed and then  as women’s choir. After numerous appearances in the country, achieving a high level of interpretation, enriching its repertoire, the Ensemble went out to the world. This was followed by numerous foreign tours:

With the arrival of Andrija Karaklajic as  an artistic director and artistic director of the house in 2002,  a completely new, young, and extremely promising art team was created. General system of upbringing and education of the youngest groups was created, that led to exceptional results over the years. Also, sections of traditional singing are getting established, under the direction of eminent ethnomusicologists. In a period of only three years, the Ensemble becomes a compact team, with strong capabilities and quality stage presentation. As a result of such work and dedication, awards arrive. First, as a placement among the ten Ensembles of the first category, at the eminent Festival “Amateurs to their own city”, in Belgrade, and then as a crown of overall work, comes the greatest success, gold medal at the oldest and most prestigious International Folklore Festival in Dijon, 2005, among 17 countries. In the following years, until today, the Ensemble of Folk Dances has reached the pinnacle of performance, improving its dancing talents to the finest  and has reached the top of amateur ensembles in Belgrade. Proof of that are numerous concerts, guest performances and tours around the world over the past 13 years. At this moment the First Ensemble has a repertoire of 21 choreographies.