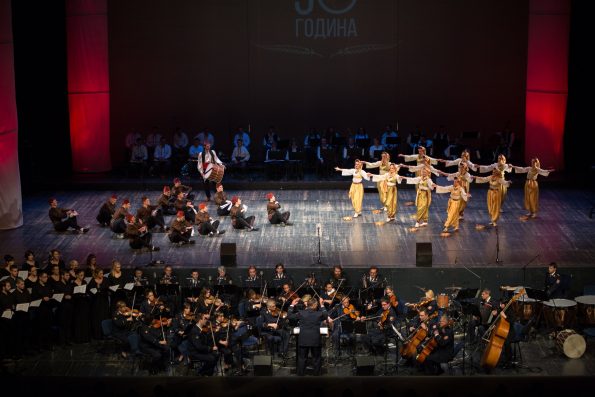 Andrija Karaklajic
was born on November 9,1980. in Belgrade, where he finished elementary and high school. He began with folk dance in 1992. in  KUD “Dimitrije Koturovic”, in Rakovica when he was 12 years old. As a very young, he showed great dance talent and  soon progressed to AKUD “Branko Krsmanovic”, where he recorded great artistic achievements as soloist of the highest level. In 2003. he started working in the National Ensemble “KOLO” and also, very quickly became a soloist. A few years later, Andrija became an instructor and an assistant for the National Folk Dance Ensemble. After only few years he reached the artistic  and  pedagogical peak in folklore. With the arrival at the head of KUD “Dimitrije Koturovic” Andrija integrated all of his dancing, pedagogic and artistic experience. Firstly, he focused his attention to systematic work, education and establishing quality interpersonal relationships. Under his leadership the Ensemble recorded growing number of members, new sections were formed, eminent artists started cooperating with Ensemble and new choreographies were introduced. The Ensemble performed at the most prestigious scenes and festivals in Serbia.

Vojislav Zivic – Bachelor of Music Performance – violin
born on July 09th, 1998.
Chief of the National Orchestra
in Koturovic since 2020.